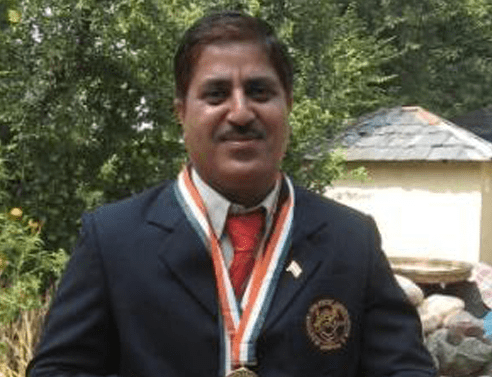 Mahinder Singh is a 56-year-old physically challenged person who hails from Naushera. In 1972, he complained of severe pain in his knees. He was taken to the District Hospital at Kangra where the doctors referred more advanced hospitals in Delhi & Chandigarh. In 1974, after it was too late to change his condition, Mahinder was to a wheelchair. He was a patient of paraplegia. Despite his condition he took up the challenges life threw at him and came out strong that he has become a source of inspiration. He gave tuitions from the village for school children. All these changes were quite empowering for the wheelchair user boy. During this time his pains subsided and he was able to put in more efforts in his working schedule. Simultaneously he made sure to polish his skills by learning new patterns of knitting and his trainers were the village ladies in which his mother was the first guru. The initial stage of knitting as a profession was a bit embarrassing for him because village people had a conception that knitting is a ladies job so he stopped knitting when someone would pass by. But slowly he became confident. He has to meet the time deadlines, take care of the work perfection and keep connected with his customer. Goal oriented work with dedication through day and night was the key to his success and he got orders from his as well as nearby villages. In 1998 he came in touch with the Chinmaya Organization for Rural Development through the survey. Community Based Rehabilitation and Inclusion Team of CORD and he started visiting CORD Training Centre for the meetings of Chinmaya Umang. He was able to look at the outer world with a different perspective. He actively participated in the Yuva Mandals run by CORD. A revolution came in his life when he was able to participate in the Regional Abilympics competition at Delhi which is organized by National Association of Abilympic of India, for special life skills training and testing of person with disabilities. Not aware of the competition items he still was able to win gold medal in this event. At 2007 Gold Medal in National Abilympic at Delhi, he was selected for international competition and went to Japan. This remarkable journey of a wheel chair user person from a village of Himachal Pradesh to a foreign country was a challenge at every step. 2003: Gold Medal in Regional Abilympic at Delhi. 2014: Gold Medal in National Abilympic at Chandigarh. In 2016 he again was selected for International Abilympic completion and went to France.
He is a social activist in his own and has given motivational lectures in so many social functions. At present he is vice president of Chinmaya Umang and actively counsels the issues of differently abled people. He is the knitting guru and has trained innumerable village ladies. He even helps his family in the daily household chores that constitutes people of age group more than 55. Mahinder wants to forward the message to those who are struggling in the initial stages of disability that “NOTHING IS IMPOSSIBLE”.