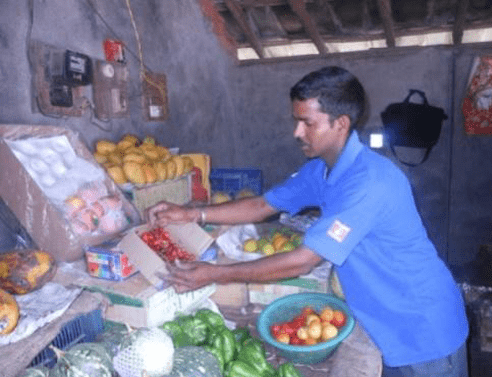 Mr. Rinku who few years back was totally bed ridden, now walks without any support to reach the wholesale vegetable market to ensure best produce for his fruit and vegetable shop near his house in Narwana village. Rinku is suffering from Ankylosing Spondylitis. The first symptoms arose when he was 15 years old. He started having pain in his knees which made him limp. Because of this he was completely bed ridden. At this stage, he was very demoralized and sometimes developed suicidal tendencies.
hen suddenly, a ray of hope came into his life – CORD. CORD has been working on various developmental aspects in 650 villages of district Kangra for the past 32 years. People with disabilities and their related issues are being taken care of under the Community Based Inclusion and Rehabilitation (CBIR) programme of CORD. Rinku was also brought to the central OPD of CORD in a vehicle and was dropped back home free of cost. Regular physical and occupational therapy enabled him to start walking with the help of a walker. Slowly, the walker was replaced by crutches, and he became more confident.
During his treatment at CORD, Rinku also participated in the process of social inclusion for disabled people. He became a member of Chinmaya Umang, which is an advocacy forum for rural people with disabilities. In this group, he met Sonika, a low vision girl. Sonika committed to Rinku as a lifelong partner. At that point, the darkness completely subdued from Rinku’s life. With CORD’s help, he was trained in making carry bags from newspaper and soap at home. He also started a small tea stall near his house.
Financially supported by Chinmaya Umang, he was able to earn enough money to run the house from the tea stall and selling carry bags and soap. To walk independently Rinku had
to get hips replaced. His parents couldn’t afford but somehow gathered enough money to have one hip replaced, but the doctor said that the other hip has to be replaced soon. He approached Dr. Didi (Kshama Metre), the National Director of CORD for help. Dr. Didi arranged for the surgery in Maharashtra, completely free of cost.
After the surgery, he was put on intensive physiotherapy in the CBIR dept. of CORD and started walking within 2 months. He then started active participation in Chinmaya Umang’s work, taking responsibilities as President and leading the advocacy group.
Now through Chinmaya Umang, he actively raises the issues of people with disabilities in Distt. Kangra. He plays a key role in the celebration of World Disability Day on 3rd December every year. He regularly attends Gram Sabhas (local units of self-governance) as a responsible citizen. With CORD’s support, Rinku got a two year fellowship from People Science Institute, Dehradun, under which he worked for disabled people in 8 Panchayats of Distt.Kangra.
With a new vigor for life, Rinku decided to take a loan from Chinmaya Umang to set up a vegetable shop in his village. His wife plays a key role in helping him in the shop. Rinku gets fruits and vegetables at a discounted price and uses the waste materials as cattle feed. He has learnt all tactics of a successful entrepreneur. He aspires to expand his business and eventually wants to own a shop. He also wants to start a fresh fruit juice stall. He wishes to earn more income monthly so that he can fulfill the needs of his aging parents as well as raise his two children well.
He says his most powerful inspiration was Dr. Didi. He wants others who are facing problems to know that without challenges life is dull. Instead of becoming demoralized, everybody should stay strong, work hard, and face life.